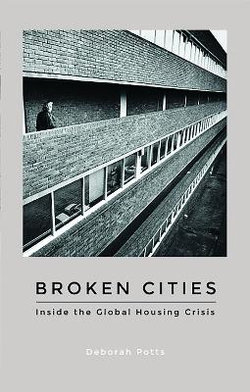 Inside the Global Housing Crisis

From Britain's 'Generation Rent'to Hong Kong's notorious 'cage homes', societies around the world are facing ahousing crisis of unprecedented proportions. The social consequences have beenprofound, with a lack of affordable housing resulting in overcrowding,homelessness, broken families and, in many countries, a sharp decline infertility.

In&nbsp;Broken Cities,Deborah Potts offers a provocative new perspective on the global housingcrisis. Rather than failures by governments to provide adequate low-incomehousing, Potts shows how the issues have resulted from the rise of free marketeconomics, which has suppressed wages for millions of workers to levels farless than is needed for their families - compounded by the profit incentives ofprivate developers. Potts in turn argues that the crisis needs radicalsolutions, including the introduction of a basic income alongside a dramaticexpansion of public housing.

With the world becomingincreasingly urbanized, this book provides a timely and urgent account of oneof the most pressing social challenges of the 21st century. Exploring theeffects of the housing crisis across the global North and South, Broken Cities is a warning of thegreater crises to come if these issues are not addressed.

Be the first to review Broken Cities.