Build Your Vocabulary 1: No. 1

"Build Your Vocabulary 1" is part of a series of four graded books designed to increase students' vocabulary from elementary to upper intermediate level. Over 1,000 words and phrases are taught to make vocabulary learning more systematic and fun.

John Flower is Emeritus Professor of Twentieth Century French Literature at the University of Kent. Flower has published extensively in the UK and in France, with more than twenty single-authored books, seventy articles and invited contributions, and a dozen edited volumes.

His work covers French literature and culture since the late nineteenth century. He has also published a study of Joan of Arc as interpreted by novelists, poets, dramatists, composers and film producers. He is a member of various editorial boards, and is the founding and general editor of the Journal of European Studies.

Be the first to review Build Your Vocabulary 1: No. 1. 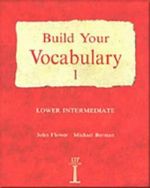 Build Your Vocabulary 1: No. 1