FIVE VALUABLE LESSONS YOU CAN LEARN BY READING BUST

Max Fisher, aging CEO of NetWorld, is not a happy man. But if he can somehow figure out a way to get rid of his nagging wife, he'll be able to carry on with his wildly self-indulgent, Viagra-fuelled existence of drunken business meetings, excursions to seedy strip joints, and, most important, his ongoing affair with his executive assistant - an Irish-American bombshell named Angela. Fisher hires a hit man, a former IRA thug nicknamed Popeye, to kill the "redundant" wife; but what the balding chief executive doesn't realize is that Popeye is secretly Angela's boyfriend - and the murder they're planning is another one altogether.

About the Authors
Ken Bruen born in Galway in 1951, is the author of The Guards (2001), the highly acclaimed first Jack Taylor novel. He spent twenty-five years as an English teacher in Africa, Japan, S.E. Asia and South America. His novel Her Last Call to Louis Mac Niece (1997) is in production for Pilgrim Pictures, his White Trilogy has been bought by Channel 4, and The Guards is to be filmed in Ireland by De Facto Films.

Jason Starr has won raves for his work from publications ranging from The New York Times to Entertainment Weekly, which compared him to Jim Thompson and James M. Cain. In 2004, he received the Barry Award for his novel Tough Luck, and in 2005 he won the Anthony Award for Twisted City. He also writes comics for Marvel and DC, as well as original graphic novels. He lives in New York City.

Ken Bruen is one of the most prominent Irish crime writers of the last two decades. Born in Galway, he spent twenty-five years travelling the world before he began writing in the mid 1990s.

Be the first to review Bust. 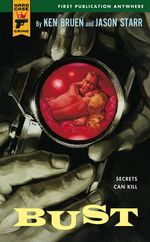