by Libby Hathorn and Lisa Stewart

Libby Hathorn is an award-winning author and poet of more than fifty books for children, young adults, and adult readers.

Translated into several languages and adapted for both stage and screen, her work has won honours in Australia, the United States, Great Britain and Holland.

In 2014 she won The Alice Award, a national award given to 'a woman who has made a distinguished and long term contribution to Australian literature.'

Be the first to review Butterfly. 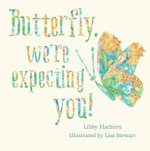 by Libby Hathorn and Lisa Stewart