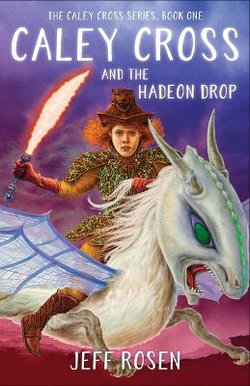 Caley Cross and the Hadeon Drop

When thirteen-year-old Caley Cross, an orphan with a dark power, is guided by a jumpsuit-wearing mole into another world - Erinath - she finds a place deeply rooted in nature where the people have animal-like powers and she is a Crown Princess -but she soon learns that the most powerful evil being in any world is waiting for her there.

Caley Cross has always known she's not a 'normal' thirteen-year-old (her ability to create zombie animals was her first clue). Still, she never expected to be whisked off to a faraway world - Erinath - where she is Crown Princess and people have 'baests' that live inside them, giving them fantastic, animal-like powers. Which would be cool, except that Caley's baest turns out to be an ancient monster that can swallow planets. Despite this, Caley manages to make the first friends of her life, Neive Olander and Kipley Gorsebrooke.

They help her navigate the Erinath Academy, where students train to compete in the annual - and deadly -Equidium contest, flying giant, dragonfly-like orocs. But to add to her usual (bad) luck, an evil 'Watcher' known as Olpheist is seeking her, anxious to retrieve something that will make him immortal. The first in an epic fantasy series from Jeff Rosen that will keep readers laughing and on the edge of their seats.

When he's not writing Caley Cross, Jeff Rosen creates award-winning children's television series like Bo on the Go, Poko, Animal Mechanicals, The Mighty Jungle, Pirates!, Monster Math Squad, and Space Ranger Roger. He was the principal writer of the beloved Theodore Tugboat. His programs have been viewed around the world and translated into numerous languages. Jeff was a founding creative partner of WildBrain (formerly DHX Media), a global children's content company, home to Peanuts, Teletubbies, Strawberry Shortcake, Caillou , Inspector Gadget, and Degrassi.

Jeff got the idea for Caley Cross when some horses escaped from his daughter's riding academy and roamed the city, popping into various shops along the way, mixing it up with the locals. The books have nothing to do with that, but you never know where ideas will lead. An accomplished painter, Jeff's work can be found in galleries, at www.jeffrosenart.com, and on Instagram @jeff.rosen. Jeff lives in Halifax, Nova Scotia, with his wife and vampire poodle, Vlad.

Be the first to review Caley Cross and the Hadeon Drop.

Caley Cross and the Hadeon Drop