by William Meikle and Wayne Miller

All new tales of William Hope Hodgson's Carnacki. Meet an Edwardian occult detective who goes where no other gentleman will dare. Nine stories and a novella that take Carnacki deep into neolithic barrows, into the crypts of ancient cathedrals and see him fighting the elemental powers of darkness on his own terms.

The Blooded Iklwa: A malevolent spirit is intent on blood. Can Carnacki identify the source of the attacks and stop the Zulu blade from its nightly haunting? Or will his client be forced to suffer a death of a thousand cuts?

The Larkhill Barrow: A pounding terror has been called up out of Salisbury Plain; an ancient darkness that will haunt your dreams.

The Sisters of Mercy: Battle hardened old soldiers lie sick abed in fear for their souls. Only someone with intimate knowledge of the powers of darkness can help them.

The Hellfire Mirror: The rituals of an infamous club have left their mark on a mirror, leading Carnacki into a fight to stop his own home from being overrun with the forces of darkness.

The Beast of Glamys: Danger to the daughter of a Scottish Lord leads Carnacki to a remote castle, and the uncovering of the secret behind a legend that has persisted for centuries.

The Tomb of Pygea: Something serpentine whispers in the dark under Admiralty Arch, and only Carnacki has the skills, and the nerve, to descend, and to listen.

The Lusitania: A cruise ship is berthed in Liverpool, deserted by passengers and crew, stuck in port until Carnacki can remove the cause of their terror; apparitions of disaster and shipwreck

The Haunted Oak: Ghosts of the recent dead walk beneath its spreading boughs and the Church needs Carnacki's expertise. But some things are best left to take their course -- natural, or supernatural.

The Shoreditch Worm: When one of the churches of London changes its chimes, something old starts to wake. Can Carnacki stop it before it is too late?

The Dark Island: Carnacki uncovers a gateway to a dark realm of magic and myth, where the far future of our planet can be touched and seen, if a man has the stomach for it.

"William Meikle does a stand up job here, of capturing the tone of the original stories. He falls naturally into the more formal language of the period, without making it any less easy to read." - The British Fantasy Society

Be the first to review Carnacki. 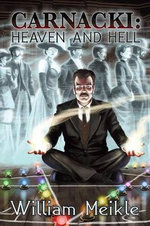 by William Meikle and Wayne Miller

Crime & Mystery Fantasy Horror & ghost stories
Hold on while we process your request.