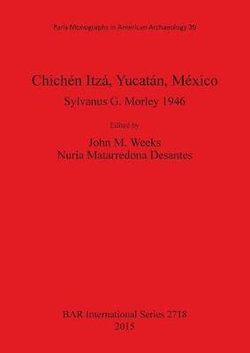 by Nuria Matarredona Desantes and John M. Weeks
Paperback
Publication Date: 31/05/2015
Be the first to write a review
Tweet
$69.16
This item qualifies for FREE delivery

Chich n Itz is a UNESCO-designated World Heritage site, one of the largest and most accessible Maya archaeological areas in southern Mexico. The densely clustered architecture of the site core covers an area of at least 6.5 square kilometres, and smaller scale residential architecture extends for an unknown distance beyond the site core. Although the history of archaeological study of the site extends back over a century, the most significant and productive effort was that directed between 1924 and 1940 by Sylvanus G. Morley under the sponsorship of the Carnegie Institution of Washington. Morley prepared a draft of a Guide Book to the Ruins of Chich n Itz in 1946, which has since languished in the archaeological archives. Although dated and probably quaint by modern standards, Morley's guide to Chich n Itz remains the only synthesis of the site based on almost 20 years of excavation, consolidation, and restoration of the ruins. Our interest in publishing Morley's manuscript was based on several factors: it was Morley's last written work; it was the only synthesis of Morley's work on Chich n Itz ; and, quite simply, it is a work important to the history of the study of Maya archaeology. Several modifications have been made to the manuscript. We have attempted to leave as much of the original text as written by Morley. Sections that have been corrected by more recent research are amended and included as notes. Repetitious text has been removed and obvious errors in spelling and punctuation have been corrected. Notes have been added by the editors to explain or amplify statements in the manuscript. In addition, written commentary on the original manuscript by Karl Ruppert has been included as notes.

Be the first to review Chichén Itzá.