The Next Decade for the People's Republic of China

Summary: This book presents eight separate essays and provides the reader a unique perspective of where China will stand by the end of the current decade. It is suitable reading for foreign policy practitioners, academics and anyone interested in one of the world's fastest-developing countries. The eight essays cover the following topics: China's internal politics; military; economy; international image and its international relations; legal development and; western regional development plans. China 2020 assesses where these issues stand today and highlights their likely trajectory over the following decade. It provides an informed and objective judgement on where things will stand by the year 2020. A unique feature of this book is that it looks in particular at the policy impact, both for China and other countries, and the most and least likely outcomes for China's development in these areas. Key Features: concentrates on the practical policy impacts and the expected outcomes each of the above areas will have; deals with key issues, like the opening up of China's undeveloped western area. A subject with little coverage in other mainstream books on China; takes a short to mid-term view of China's development, so that the period is highly definable and the contours of what might happen are already clear; written by a group of writers with immense experience as diplomats and academics in China; includes an assessment of China's legal development by a lawyer who has worked both in China and the United Kingdom for a major international legal practice. The Editor: Dr. Kerry Brown is a former diplomat, author of four books on China, and Senior Fellow at Chatham House in London. He is also an active Research Associate at the International Relations Centre at the School of Oriental and African Studies (SOAS) based in London. Contributors include: Kerry Brown, Elizabeth Corrin, Gary Li, Tim Summers, Victoria Turke, Jonathan Watts, Kate Westgarth, and Peter Wood. 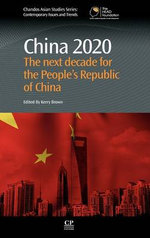