"China," Napoleon once remarked, "is a sleeping lion. Let her sleep, for when she wakes she will shake the world." In 2014, President Xi Jinping triumphantly declared that the lion had awoken. Under Xi, China is pursuing an increasingly ambitious foreign policy with the aim of restoring its historical status as the dominant power in Asia. From the Mekong Basin to the Central Asian steppe, the country is wooing its neighbors with promises of new roads, railways, dams, and power grids. Chinese trade and investment presents huge opportunities for China's neighbors, and its ability to build much-needed infrastructure could assist in the development of some of the world's poorest countries. Yet Chinas rise also threatens to reduce its neighbours to the status of exploited vassals. In Vietnam and Myanmar, resentment of Chinese encroachment has already incited anti-Chinese protests, and many countries in the region are seeking to counterbalance its influence by turning to the US and Japan. Combining a concise overview of the situation with on-the-ground reportage from over seven countries, China's Asian Dream offers a fresh perspective on one of the most important questions of our time: what does China's rise mean for the future of Asia and of the world?

Be the first to review China's Asian Dream. 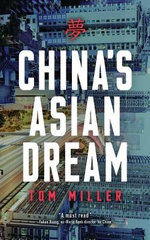