"China," Napoleon once remarked, "is a sleeping lion. Let her sleep, for when she wakes she will shake the world." In 2014, President Xi Jinping triumphantly declared that the lion had awoken. Under his leadership, China is pursuing a dream to restore its historic position as the dominant power in Asia.
Today, with the US seemingly in decline and with China strengthening its economic grip on the continent, that dream is closer than ever. From holding its ground in trade wars with the US, to presenting itself as a world leader in the fight against climate change, a newly confident China is flexing its economic muscles for strategic ends. And with the Belt and Road initiate, billed as a new Silk Road for the twenty-first century, China is set to extend its influence throughout Eurasia and across the South China Sea and the Indian Ocean, drawing its neighbors ever tighter into its embrace. But with the Chinese and US militaries also vying over the Pacific, does this newfound confidence put China on a collision course with the US?
Combining a geopolitical overview with on-the-ground reportage from a dozen countries, this new edition of China's Asian Dream engages with the most recent developments in the ongoing story of China's ascendency, and offers new insights into what the rise of China means not only for Asia, but for the world.

Be the first to review China's Asian Dream. 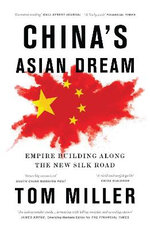