by Michael A. Singer, Peter Ochs,  David Sandmel and others

Be the first to write a review
Tweet
$72.50
This item qualifies for FREE delivery
Over the past few decades, there has been a dramatic and unprecedented shift in Jewish-Christian relations, including signs of a new, improved Christian attitude towards Jews. Christianity in Jewish Terms is a Jewish theological response to the profound changes that have taken place in Christian thought. The book is divided into ten chapters, each of which features a main essay, written by a Jewish scholar, that explores the meaning of a set of Christian beliefs. Following the essay are responses from a second Jewish scholar and a Christian scholar. Designed to generate new conversations within the American Jewish community and between the Jewish and Christian communities, Christianity in Jewish Terms lays the foundation for better understanding. It was named a Choice Outstanding Academic Book of 2001.

Michael A. Singer is the author of the New York Times bestseller, The Untethered Soul, which has also been published in Turkey, Brazil (in Portuguese), Switzerland (in German), Spain, Japan, China, the Netherlands, Denmark, Finland, Poland, and Italy.

Singer received a master's degree in economics from the University of Florida in 1971. During his doctoral work, he had a deep inner awakening and went into seclusion to focus on yoga and meditation.

In 1975, he founded Temple of the Universe, a now long-established yoga and meditation center where people of any religion or set of beliefs can come together to experience inner peace. Through the years, Singer has made major contributions in the areas of business, the arts, education, healthcare, and environmental protection.

He previously authored two books on the integration of Eastern and Western philosophy: The Search for Truth and Three Essays on Universal Law: Karma, Will and Love.

Be the first to review Christianity In Jewish Terms. 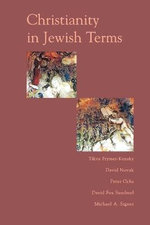 by Michael A. Singer, Peter Ochs,  David Sandmel and others