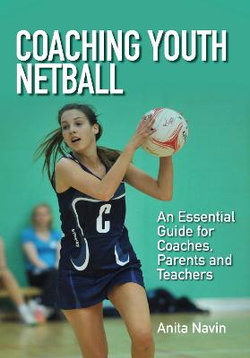 An Essential Guide for Coaches, Parents and Teachers

'Coaching Youth Netball' is a one-stop resource that will offer coaches, teachers and parents everything they need to deliver fun, dynamic, player-centred practice sessions as well as guidance to how to run a team and a club. Coaches at all levels will find ideas and information that will help them formulate plans to suit their players' abilities.

• A one-stop guide that will offer coaches, teachers and parents everything they need to deliver fun and dynamic netball practice sessions.
• Gives guidance on how to run and manage a team and a club.
• Helps teach fundamental skills; covers game sense, defensive and attacking skills and much, much more.
• Fully illustrated with 40 colour photographs.
• Anita Navin has been involved with England Netball for over twenty-five years and in 2011 was awarded UK Coach Educator of the Year.

About the Author
Anita Navin is Head of School for Sport and Exercise at the University of Gloucestershire, and has been involved with England Netball for over twenty-five years as an athlete, coach, coach developer, talent scout and consultant. In 2011 she was awarded UK Coach Educator of the Year. Her involvement with netball continues in her role as a TV commentator, and she has written several books, including 'Netball Practices and Training' (Crowood). Here, she has assembled an expert team to provide the very best ideas available on netball coaching.

Be the first to review Coaching Youth Netball.