Conqueror of the Seas - the Story of Magellan

Many of the earliest books, particularly those dating back to the 1900s and before, are now extremely scarce and increasingly expensive. We are republishing these classic works in affordable, high quality, modern editions, using the original text and artwork.

Stefan Zweig was born in 1881 in Vienna, a member of a wealthy Austrian-Jewish family. He studied in Berlin and Vienna and was first known as a translator and later as a biographer.

Zweig travelled widely, living in Salzburg between the wars, and enjoying literary fame. His stories and novellas were collected in 1934. In the same year, with the rise of Nazism, he briefly moved to London, taking British citizenship.

After a short period in New York, he settled in Brazil where in 1942 he and his wife were found dead in bed in an apparent double suicide.

Be the first to review Conqueror of the Seas - the Story of Magellan. 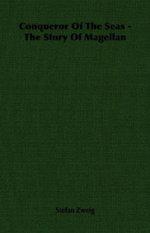 Conqueror of the Seas - the Story of Magellan