Contemporary Art in Eastern Europe, is a fresh, challenging, and insightful compilation of the most inspiring Eastern European art made from the 1960s to the present day. From Russia to Poland and Romania, and from the Czech Republic to Yugoslavia and East Germany, Contemporary Art in Eastern Europe is an ambitious attempt to chart the changing realities of the eastern half of the continent, as seen through the eyes of artists, critics, photographers and curators. If the Iron Curtain and the antagonisms of the Cold War era had often kept the richness and diversity of Eastern European art hidden from the rest of the world, the contemporary era has been a witness to its unparalleled creative explosion and fruitful dialogue with the global art scene. The work featured in this book explores the correlations between shifts in the political, cultural, economic and geographical realities of Eastern Europe and the region's contemporary art. The artists in this book revisit the region's past to envision a better future, reaching challenging conclusions and creating some of the most powerful and inspiring art being produced today.
The book features essays from respected writers in the field and profiles the most influential artists producing work in and from the region today, including Marina Abramovic, Christo, Krzysztof Wodiczko, Zofia Kulik, Komar and Melamid, IRWIN, Natalia Lach-Lachowicz, Alexander Brodsky, Ewa Partum, NSK, Group OHO, Stano Filko, Laibach, KwieKulik, Post Ars, Weekend Art, Zbigniew Libera, Marjetica Potrc, and Mladen Stilinovic.

Born in Belgrade just after the end of the Second World War, Marina Abramovic (born 1946) was raised in the Serbian Orthodox Church (her great uncle was a Patriarch and a canonized saint in the Church) and left Yugoslavia in 1976, having already established herself as a performance artist, living in Amsterdam and eventually New York, where she presently lives.

In 2010 she was the subject of an enormously popular retrospective at The Museum of Modern Art, New York.

Be the first to review Contemporary Art in Eastern Europe. 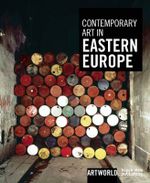