What happens when an entire group of human beings is excluded from the definition of humanity? How is the power of language used to distort reality? What happens when a comprehensive economic plan is based on theft, brainwashing, slave labour, and murder? These and other philosophical questions about the Holocaust are contemplated here. In 1988, a group of philosophers who had survived the Holocaust, or had known people at the Auschwitz death camp, decided to found an organisation that would examine the philosophical implications of Shoah: the Society for the Philosophic Study of Genocide and the Holocaust (SPSGH). Noting that the history and the personal horror stories had been told and retold, SPSGH's founders Sander Lee, Berel Lang, and Alan Rosenberg argued that too little study had been so far devoted to the philosophy of Hitler's final solution and other genocides. Auschwitz problematised the Enlightenment concept of humanity, and other concepts. The perfection of state-sponsored and -administered mass death issued in new forms of language, moral indifference, and forgetting. Philosophy often even fails to mention the Holocaust in discussions of National Socialism.
And the disaster of Auschwitz has been largely neutralised by the normalisation of a 'ruined' language. This volume includes essays in several areas: witnesses and testimonies; morality and ethics; art and poetry; history and memory; and the crisis of representation. Contributors are Karyn Ball, Eve Bannet, Debra Bergoffen, James Bernauer, Klaus Dorner, Jennifer N Fink, Roger Fjellstrom, Ruth Liberman, Burkhard Liebsch, Alan Milchman, Raj Sampath, Paul Sars, Hans Seigfried, Thomas W Simon, Dan Stone, Peter Strasser, Frans van Peperstratten, Erik M Vogt, Andrew Weinstein, and others.

Be the first to review Contemporary Portrayals of Aushwitz. 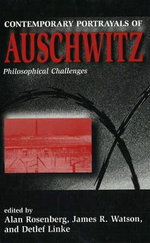 European history Philosophy The Holocaust
Hold on while we process your request.