On the 7th day of the 7th month (is it any wonder I love the number?) my new parents drove north to a hospital 257 miles from their home, where they named me after a cold-climate tree and changed the world. Counting By 7s is the story of Willow Chance, a twelve-year-old girl who has been identified at an early age as gifted. Willow lives in Bakersfield, California and comes home from school one day to the news that her parents have been killed in a traffic accident. What follows is Willows search to find a place where she belongs.

She has written and directed a number of successful feature films. The mother of two sons, Holly lives with her husband, Gary Rosen, in Santa Monica, California. 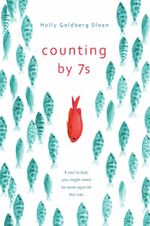 General fiction (Children's / Teenage) For Teens Gift Guide
Hold on while we process your request.