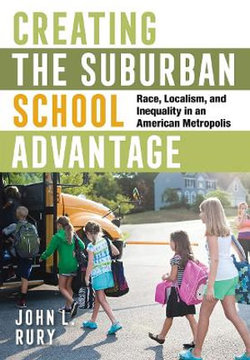 Race, Localism, and Inequality in an American Metropolis

Creating the Suburban School Advantage explains how American suburban school districts gained a competitive edge over their urban counterparts. John L. Rury provides a national overview of the process, focusing on the period between 1950 and 1980, and presents a detailed study of metropolitan Kansas City, a region representative of trends elsewhere.

While big-city districts once were widely seen as superior and attracted families seeking the best educational opportunities for their children, suburban school systems grew rapidly in the post?World War II era as middle-class and more affluent families moved to those communities. As Rury relates, at the same time, economically dislocated African Americans migrated from the South to center-city neighborhoods, testing the capacity of urban institutions. As demographic trends drove this urban-suburban divide, a suburban ethos of localism contributed to the socioeconomic exclusion that became a hallmark of outlying school systems. School districts located wholly or partly within the municipal boundaries of Kansas City, Missouri, make for revealing cases that illuminate our understanding of these national patterns.

As Rury demonstrates, struggles to achieve greater educational equity and desegregation in urban centers contributed to so-called white flight and what Senator Daniel Patrick Moynihan considered to be a crisis of urban education in 1965. Despite the often valiant efforts made to serve inner city children and bolster urban school districts, this exodus, Rury cogently argues, created a new metropolitan educational hierarchy?a mirror image of the urban-centric model that had prevailed before World War II. The stubborn perception that suburban schools are superior, based on test scores and budgets, has persisted into the twenty-first century and instantiates today's metropolitan landscape of social, economic, and educational inequality.

Be the first to review Creating the Suburban School Advantage.