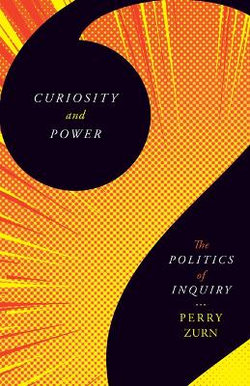 The Politics of Inquiry

A trailblazing exploration of the political stakes of curiosity

Curiosity is political. Who is curious, when, and how reflects the social values and power structures of a given society. In Curiosity and Power, Perry Zurn explores the political philosophy of curiosity, staking the groundbreaking claim that it is a social force--the heartbeat of political resistance and a critical factor in social justice. He argues that the very scaffolding of curiosity is the product of political architectures, and exploring these values and architectures is crucial if we are to better understand, and more ethically navigate, the struggle over inquiry in an unequal world.&nbsp;

Drawing not only on philosophy and political theory but also on feminist theory, race theory, disability studies, and trans studies, Curiosity and Power tracks curiosity in the structures of political marginalization and resistance--from the Civil Rights Movement to building better social relationships. Curiosity and Power insists that the power of curiosity be recognized and engaged responsibly.

Be the first to review Curiosity and Power.