A Life on the Frontier of a New America

Pulitzer Prize
Be the first to write a review
Tweet
$52.99

"In this magisterial biography, T. J. Stiles paints a portrait of Custer both deeply personal and sweeping in scope, proving how much of Custer's legacy has been ignored. He demolishes Custer's historical caricature, revealing a capable yet insecure man, intelligent yet bigoted, passionate yet self-destructive, a romantic individualist at odds with the institution of the military (court-martialed twice in six years) and the new corporate economy, a wartime emancipator who rejected racial equality. Stiles argues that, although Custer was justly noted for his exploits on the western frontier, he also played a central role as both a wide-ranging participant and polarizing public figure in his extraordinary, transformational time--a time of civil war, emancipation, brutality toward Native Americans, and, finally, the industrial revolution--even as he became one of its casualties. Intimate, dramatic, and provocative, this biography captures the larger story of the changing nation in Custer's tumultuous marriage to his highly educated wife, Libbie, their complicated relationship with Eliza Brown, the forceful black woman who ran their household, as well as his battles and expeditions. It

Be the first to review Custer's Trials. 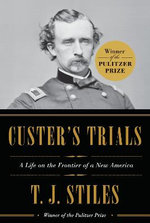