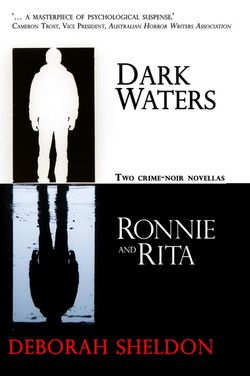 Each story a mirror-image of the other...

DARK WATERS
Brendan Reilly, a.k.a. Danny Boy, is a veteran of the Overlords, an outlaw motorcycle club. A near-fatal accident leads him to an epiphany: he is determined to quit the life and reconnect with his ex-wife and son. At the same time, the Overlords are preparing for war against a rival gang, the Golden Jackals, and with Brendan's loyalty in question, he is pushed further into the war when all he wants is a way out.

RONNIE AND RITA
Ron Spooner is middle-aged, alone and lonely, a nobody who has mowed lawns for a living ever since he was a boy. When he meets a young drifter, Rita, they fall in love, and want nothing more than a family of their own. Too bad it isn't possible. Or is it? What Rita asks him to do is wrong. Terribly wrong. But Ron is willing to sacrifice everything for this twisted love affair.

Be the first to review Dark Waters / Ronnie and Rita.