by Derek Fridolfs and Dustin Nguyen

My name is Bruce Wayne and I'm the new kid (ugh) at Ducard Academy.

I can't say for certain, but I think something fishy's going on. There's a gang of clowns roaming the halls, a kid named Bane wants to beat me up,and the guidance counselor Hugo Strange seems really, well, strange. At least I have two new friends - Clark and Diana are kinda cool, I guess.

We're going to solve this case no matter what, even if I have to convince Alfred to let me stay up past 11pm.

Batman, Superman, and Wonder Woman are attending the same high school and they have a mystery to solve, but just because you have super-human strength, you're faster than a speeding bullet, or are an Amazonian princess, it doesn't mean you get to stay up late!! 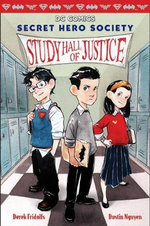 by Derek Fridolfs and Dustin Nguyen