Death as a Way of Life

From Oslo to the Geneva Agreement

Be the first to write a review
Tweet
RRP  $38.00 $36.90
What went wrong after Oslo? How can Israelis and Palestinians make peace? How has the violence changed their lives, and their souls? In Death as a Way of Life, David Grossman, one of Israel's great fiction writers, has addressed these questions in a series of passionate essays and articles, writing not only as one of his country's most respected novelists and commentators, but as a husband and father and peace activist bitterly disappointed in the leaders of both sides. David Grossman is an Israeli author. His books have been translated into more than 36 languages, and have won numerous prizes.

He addressed the Israeli-Palestinian conflict in his 2008 novel, To the End of the Land. Since that book's publication he has written a children's book, an opera for children and several poems.His most recent book, Falling Out of Time, deals with the grief of parents in the aftermath of their children's death.

His most recent novels were To the End of the Land, described by Jacqueline Rose as ‘without question one of the most powerful and moving novels I have ever read’, and Falling Out of Time.

He is the recipient of the French Chevalier de l’Ordre des Arts et des Lettres and the 2010 Frankfurt Peace Prize.

In 2017 his novel, "A Horse Walks Into a Bar" won the Man Booker international Prize.

Be the first to review Death as a Way of Life. 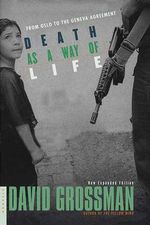 Death as a Way of Life