The impressively versatile Joanne Harris in her psychological thriller mode, at her darkest and most unsettling.

After thirty years at St Oswald's Grammar in North Yorkshire, Latin master Roy Straitley has seen all kinds of boys come and go. Each class has its clowns, its rebels, its underdogs, its 'Brodie' boys who, whilst of course he doesn't have avourites, hold a special place in an old teacher's heart. But every so often there's a boy who doesn't fit the mould. A troublemaker. A boy with hidden shadows inside.

With insolvency and academic failure looming, a new broom has arrived at the venerable school, bringing Powerpoint, sharp suits and even sixth form girls to the dusty corridors. But while Straitley does his sardonic best to resist this march to the future, a shadow from his past is stirring. A boy who even twenty years on haunts his teacher's dreams. A boy capable of bad things.

Joanne Harris was born of a French mother and English father, and spent most of her childhood holidays on the island of Noirmoutier, in southern Brittany and Nerac, in Gascony, where she was immersed in French village life, folklore and tradition.

She is the author of two previous novels, Sleep, Pale Sister, and The Evil Seed. Her fourth, Blackberry Wine was published in March 2000 to great critical acclaim. Joanne lives in Yorkshire with her husband and young daughter.

Be the first to review Different Class. 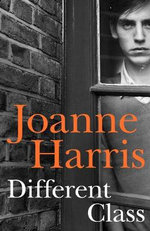