Be the first to write a review
Tweet
24%
OFF RRP  $89.99 $68.95
This item qualifies for FREE delivery
"You believe in pirates, of course?" Walt Disney once asked on a Disneyland television program. . . . Disney Pirates: The Definitive Collector's Anthology delves behind-the-scenes across ninety years of Disney film, television, and park history. Pirates have captured people's imaginations for centuries, and Walt Disney believed in pirates as a source of great popular entertainment. Walt's very first all live-action feature film was based upon Robert Louis Stevenson's Treasure Island, and even before that, he selected J. M. Barrie's Peter Pan, in which pirates figure so prominently, as a key feature-length animated film for his studio. Years later, Pirates of the Caribbean opened in Disneyland just months after Walt had passed away, making it one of the last Disney theme park attractions in which he was personally involved. That attraction ultimately spawned similar versions at Disney parks around the world, one of the most successful series in motion picture history with the five Pirates of the Caribbean films, and a vast themed land at Shanghai Disneyland called Treasure Cove--celebrating the entirety of the Pirates of the Caribbean franchise.

Be the first to review Disney Pirates: the Definitive Collector's Anthology. 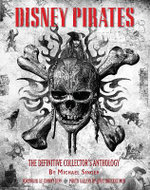