Adam is dead, but that's not his only problem. His husband, Wade, is still alive and sleeping with losers. His guardian angel, Guy, has grown fond of the liquor cabinet. And Adam suspects his demise was the result of foul play.

Meanwhile, in the depths of the Afterlife, the devil forces Adam to put on a play for the sinners. If he fails to entertain them, Guy's parents will spend eternity in the Underworld.

As he gambles with the freedom of the damned angels, Adam comes to terms with infidelity, friendship, and the reason why he was the victim of a double murder.

Be the first to review Drama Queens and Devilish Schemes. 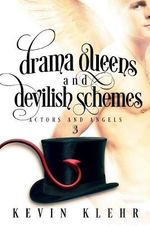