Chief Inspector William Wisting is an experienced policeman familiar with the dark side of human nature.

He lives in challenging times for the Norwegian police force, meeting them with integrity and humanity, and a fragile belief that he can play a part in creating a better world.

Dregs begins with a police report giving the place and time of the discovery of a training shoe washed up on the sand, containing a severed foot. Soon a second shoe is washed up, but it is another left foot. What is the explanation for this? Has there been some kind of terrible accident at sea?

Does it indicate the killing and dismembering of two victims? Is there a link with the unsolved mystery of a number of disappearances in the Larvik area in recent months? In this gripping police procedural, Wisting gradually gets to the bottom of the mystery with the help of his all too human colleagues and his journalist daughter, Line.

Jorn Lier Horst (born in Bamble, Telemark 1970) is a former Senior Investigating Officer at the Norwegian police force. He made his literary debut as a crime writer in 2004 and is now considered one of the foremost Nordic crime writers.

His William Wisting series of crime novels has been extremely successful, having sold more than 500,000 copies in Scandinavia, UK, Germany, Netherlands and Thailand. Dregs, sixth in the series, was published in English by Sandstone Press in 2011.

The next book, Closed for Winter, won Norway's Booksellers' Prize in 2012 and was shortlisted for the Riverton Prize. His latest novel, The Hunting Dogs, won both the prestigious Golden Revolver, for best Norwegian crime, and The Glass Key, which widened the scope to best crime fiction in all the Nordic countries, in 2013. 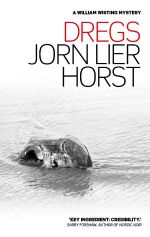 Crime & criminology Nordic Noir
Hold on while we process your request.