by Anders Aslund, Edmund Herzig,  Reuel R. Hanks and others


a new essay on opposition movements in Russia, discussing the associations of the prominent anti-corruption campaigner Aleksei Navalnyi with both liberalism and nationalism
analysis of recent political developments in Russia at both the federal and regional level
a detailed discussion of the period of political power-sharing in Georgia between President Mikheil Saakashvili and the Government of Prime Minister Bidzina Ivanishvili
expanded directory coverage of the separatist territories of Abkhazia, Nagornyi Karabakh, South Ossetia and Transnistria, and of the autonomous territories of Crimea, Gagauz-Yeri and Naxcivan
brand new essays providing expert analysis of the recent political history of Azerbaijan and Turkmenistan.


Chapters on each country, containing:


essays on its recent history and economy, and a chronology of events
an extensive statistical survey of economic indicators
a comprehensive directory of the most significant political, commercial and cultural institutions
a bibliography of books concerned with the country's history, politics and economy


Who's Who in Eastern Europe, Russia and Central Asia

Be the first to review Eastern Europe. 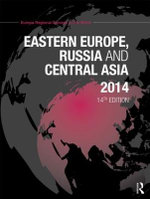 by Anders Aslund, Edmund Herzig,  Reuel R. Hanks and others