Ray Bradbury has published some 500 short stories, novels, plays and poems since his first story appeared in Weird Tales when he was twenty years old.

Among his many famous works are ‘Fahrenheit 451’, ‘The Illustrated Man’ and ‘The Martian Chronicles’.

Be the first to review EC Archives. 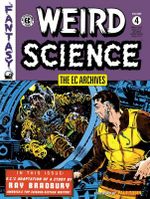 Graphic Novels Science fiction
Hold on while we process your request.