This item qualifies for FREE delivery
The French Religious Protectorate was an institutionalized and enduring policy of the French government, based on a claim by the French state to be guardian of all Catholics in China. The expansive nature of the Protectorate's claim across nationalities elicited opposition from official and ordinary Chinese, other foreign countries, and even the pope. Yet French authorities believed their Protectorate was essential to their political prominence in the country. This
book examines the dynamics of the French policy, the supporting role played in it by ecclesiastical authority, and its function in embittering Sino-foreign relations.

In the 1910s, the dissidence of some missionaries and Chinese Catholics introduced turmoil inside the church itself. The rebels viewed the link between French power and the foreign-run church as prejudicial to the evangelistic project. The issue came into the open in 1916, when French authorities seized territory in the city of Tianjin on the grounds of protecting Catholics. In response, many Catholics joined in a campaign of patriotic protest, which became linked to a movement to end the
subordination of the Chinese Catholic clergy to foreign missionaries and to appoint Chinese bishops.

With new leadership in the Vatican sympathetic to reforms, serious steps were taken from the late 1910s to establish a Chinese-led church, but foreign bishops, their missionary societies, and the French government fought back. During the 1930s, the effort to create an indigenous church stalled. It was less than halfway to realization when the Chinese Communist Party took power in 1949. Ecclesiastical Colony reveals the powerful personalities, major debates, and complex series of
events behind the turmoil that characterized the nineteenth- and early twentieth-century experience of the Catholic church in China.

Be the first to review Ecclesiastical Colony. 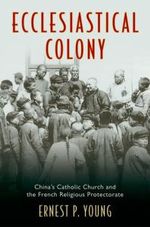