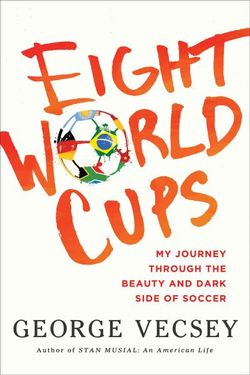 My Journey Through the Beauty and Dark Side of Soccer

"Full of humor and insight about sport and culture.... The pomp, glory, and great entertainment all get their due in Eight World Cups."--The Boston Globe

Blending witty travelogue with action on the field--and shady dealings in back rooms--George Vecsey offers an eye-opening, globe-trotting account of eight World Cups. He immerses himself in the great national leagues, historic clubs, and devoted fans and provides his up-close impressions of charismatic soccer stars like Socrates, Maradona, Baggio, and Zidane, while also chronicling the rise of the U.S. men's and women's teams.

Vecsey shows how each host nation has made the World Cup its own, from the all-night street parties in Spain in 1982 to the roar of vuvuzelas in South Africa in 2010, as the game in the stadium is backed up by the game in the street. But the joy is sometimes undermined by those who style themselves the game's protectors.

The paperback edition also includes a new afterword about the 2014 World Cup in Brazil, which reached new levels of excitement and interest, especially in the United States. Vecsey's sharp reporting and eye for detail make his book an unforgettable journey.

Be the first to review Eight World Cups.