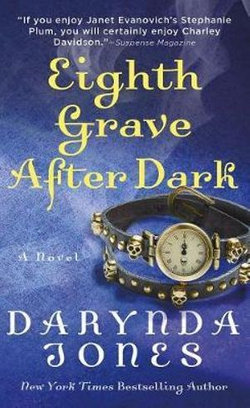 Sometimes I wonder if the purpose of my life
is to serve as a cautionary tale to others.
-T-shirt

Charley Davidson has enough going on without having to worry about twelve hellhounds hot on her trail. She is, after all, incredibly pregnant and feeling like she could pop at any moment. But, just her luck, twelve deadly beasts from hell have chosen this time to escape onto our plane, and they've made Charley their target. And so she takes refuge at the only place she thinks they can't get to her: the grounds of an abandoned convent. Of course, if hellhounds aren't enough, Charley also hasa new case to hold her attention: the decades-old murder of a newly-vowed nun she keeps seeing in the shadows of the convent.
Add to that the still unsolved murder of her father, the strange behavior of her husband, and Charley's tendency to attract the, shall we say, undead, and she has her hands full...but also tied.

Winner of the 2009 Golden Heart for Best Paranormal Romance for her manuscript FIRST GRAVE ON THE RIGHT, Darynda was born spinning tales of dashing damsels and heroes in distress for any unfortunate soul who happened by, annoying man and beast alike.

After the Golden Heart final, she pimped herself as best she could, landed an amazing agent and sold to St. Martin's Press in a three-book deal.

She is thrilled to have the prestigious Piatkus publish the series in the UK. Darynda lives in the United States in a beautiful place called the Land of Enchantment, also known as New Mexico, with her husband of more than 25 years and two beautiful sons, the Mighty, Mighty Jones Boys.