An abused child, yet confident of her destiny to reign, a woman in a man's world, passionately sexual yet, she said, a virgin, famed as England's most successful ruler yet actually doing very little, Elizabeth I is a bundle of contradictions.Starting with Elizabeth's own speeches and writings, Starkey lays novel emphasis on two things- her faith made her see religion as a purely personal relationship between the individual conscience and God, yet her sophisticated education led her to smoke-and-mirrors view of politics, in which clever image-making and speech-writing could solve or postpone real problems. The result was a surprising contemporary approach to some very modern questions, like civil strife in Scotland and Ireland, and the risk of England's absorption into a European super-state. This new approach to the enigma of the Queen's character is presented within a lively and readable retelling of her reign; her love for Robert Dudley, the tragi-comedy of her favourites and suitors, her epic struggles with Mary Queen of Scots and Philip of Spain, and the final, humiliating debacle of her relationship with Robert Devereux, Earl of Essex.

Be the first to review Elizabeth. 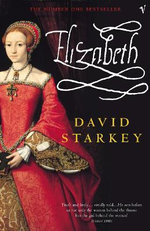