The Commercial Sea Fisheries of England and Wales Since 1300

by David Starkey, Christopher Reid,  John Ramster and others

A superb overview of the development of the sea fisheries of England and Wales from medieval times to the present. Beautifully illustrated with over 150 drawings, paintings and photographs. A major reference work on a much-neglected aspect of our history. Fish and fishermen have played the most fundamental role in the provision of food in this country for the last 1,000 years and this definitive work gets to the heart of every aspect of England's fisheries. Written by a team of experts the work is, however, far from being a dry, academic tome. The texts are readable and easily accessible and with the subject embracing such themes as food, ships, local crafts, hard labour, international rivalry and ecology the book will fascinate anyone who takes more than a passing interest in the story behind their 'cod and chips'. Fishing, combining as it does elements of agriculture, industry, transport and hunting, has always been a complex human activity, and its study draws together technological, political, economic, geographical and social disciplines. The very breadth of the subject is fascinating. Seafood and diet, the curing and preservation of fish and its distribution, fish farming from monastic institutions to the modern hi-tech methods and aquaculture, boats and gear, catching methods, the social structures of fishing communities, the Missions to deep-sea fishermen, the development of harbours and docks, fish protection against the background of ecological collapse, and the fishermen's skills set against such a dangerous occupation - these are just some of the themes which are covered. No previous publication has tackled this immense subject in such detail and in so accessible a manner and it will appeal to general and local historians as much as to more specialist maritime historians and enthusiasts. The book has been written by twenty contributors, all experts in their fields, and edited by a team of three.

Be the first to review England's Sea Fisheries: The Commercial Sea Fisheries of England and Wales Since 1300. 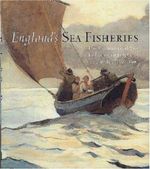 by David Starkey, Christopher Reid,  John Ramster and others