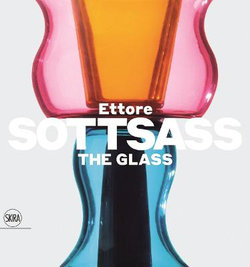 The brilliant architect and designer Ettore Sottsass (1917–2007) designed glass wares from 1947 until the end of his career.

He established a working relationship with the glass makers on the Venetian island of Murano during the 1940s, exhibiting glass works at the 1948 Venice Biennale and continuing to work with the city's craftsmen over the following decades, producing Murano glass pieces under aegis of the Memphis group during the 1980s.

Colorful and sculptural, these works are intriguingly ambiguous; Sottsass said of them, "I've tried to get away from the everyday object and sought to make Glass works with a capital G. Of course, that's a dangerous approach, because I don't want to be an artist, or a sculptor, but in the end the objects I produce look like glass sculptures, and yet they aren't: they're a mix that's hard to fathom."

Published on the 100th anniversary of Sottsass' birth, this catalogue raisonné documents the entire period of his glass and crystal oeuvre, from the series he designed in the 1970s for Vistosi to the Memphis collections of the 1980s, the symbolic forms of the 1990s, the stunning constructions for the Millennium House in Qatar and the famous Kachinas.

The book's wealth of images, analysis of design and painting, examination of the works' cultural and artistic context and reproduction of works (including many unpublished pieces) make this volume the first thorough study on Ettore Sottsass' works in glass and crystal.

Luca Massimo Barbero is a modern and contemporary art historian. He was director of theMACRO, Rome, from 2009 to 2011. Since 2002 he has been an associate curator at the PeggyGuggenheim Collection, Venice.

He is currently director of the Institute of Art History at theFondazione Cini, Venice, and artistic director of the Galleria d'arte contemporanea di PalazzoForti, Verona.

Be the first to review Ettore Sottsass: the Glass.