Everyone Brave Is Forgiven 2

Moving from Blitz-torn London to the Siege of Malta, this is a story of passion, loss, prejudice and incredible courage. This is the novel Chris Cleave was born to write.

The breathtaking new novel from the multi-award-winning author of The Other Hand.

When war is declared, Mary North leaves finishing school unfinished, goes straight to the War Office, and signs up.

Tom Shaw decides to give it a miss - until his flatmate Alistair unexpectedly enlists, and the conflict can no longer be avoided.

Young, bright and brave, Mary is certain she'd be a marvelous spy. When she is - bewilderingly - made a teacher, she instead finds herself defying prejudice to protect the children her country would rather forget.

Tom, meanwhile, finds that he will do anything for Mary.

And when Mary and Alistair meet, it is love, as well as war, that will test them in ways they could not have imagined, entangling three lives in violence and passion, friendship and deception, inexorably shaping their hopes and dreams.

In a powerful combination of both humour and heartbreak, this dazzling novel weaves little-known history, and a perfect love story, through the vast sweep of the Second World War - daring us to understand that, against the great theatre of world events, it is the intimate losses, the small battles, the daily human triumphs, that change us most.

"It's a war novel but not as you know it. Cleave, a Guardian journalist and celebrated novelist (Incendiary, The Other Hand), has reportedly written his best book to date with this tale of a young teacher determined to stay in Blitz-time London." - Esquire, Top 10 Best New Novels of 2016

"a second world war story that moves between blitz-hit London, where an aristocratic young woman teaches children deemed unsuitable for evacuation, and the bombarded island of Malta." - The Guardian Books in 2016 - A literary calendar

"A story of romance and heartbreak set during World War II. " - The Washington Post - The 20 novels we can't wait to read in 2016. And this list only gets us to June

"Although humour is an important ingredient in this novel, it's a book with a lot of heart and insight ... it is profound and provocative and beautifully written." - Sunday Telegraph, Australia on THE OTHER HAND

"Exquisitely balanced between terrible sadness and brilliant humour." - Observer on THE OTHER HAND

"Big themes, high emotion and cliffhangers aplenty... an enormously affecting investigation of love, guilt and global responsibility, told with a bittersweet urgency." - Justine Jordan, Guardian on THE OTHER HAND 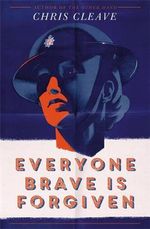 Everyone Brave Is Forgiven

War & combat fiction Staff Picks - Fiction Books Book of the Month
Hold on while we process your request.