by Geza Fehervari and Elizabeth Savage

The excavations at Surt have greatly enhanced our knowledge of the life, material culture and history of North Africa, particularly during the early Fatimid period. A survey of the site was carried out by Prof. R.C. Goodchild shortly after the Second World War. Excavations were begun by the Department of Antiquities in 1965/66 which traced the city walls and its three gates. Further excavations were carried out under the direction of Geza Fehervari between 1977 and 1981. It is these excavations which this volume reports. They found the heart of the town, the madina. Large numbers of cisterns, a well, cess-pits and numerous bread ovens.

Thousands of glazed and unglazed sherds and several complete unglazed vessels came to light, together with iron, bronze and glass fragments. A large number of iron and glass slag fragments were found, which indicated local manufacture of glass and iron. The plan of the mosque is typical of Fatimid mosques in Ifriqiya and the closest parallels are those of Mahdiya, Zwila and Ajdabiya.

Volume includes and Arabic summary and a foldout plan of the site.

Be the first to review Excavations at Surt (Medinet al-Sultan) between 1977 and 1981. 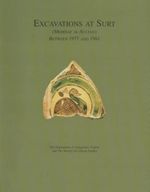 by Geza Fehervari and Elizabeth Savage