Fantastic Beasts and Where to Find Them : Niffler Deluxe Book and Model Set

Embargoed to the 18th of November

This Fantastic Beasts and Where to Find Them themed book and wood model set brings the world of the upcoming film to life.

Filled with incredible illustrations and unit photography, the guidebook provides fascinating behind-the-scenes facts about the film and the creatures from the Warner Bros. archive and includes a do-it-yourself 3D wood model of the Niffler, one of the many magical creatures seen in the film.

Ramin Zahed is a senior editor at Insight Editions and the former editor in chief of Animation Magazine.

A journalist who has covered the film and television industries for over 20 years, his writing has appeared in Variety, the Hollywood Reporter, the Los Angeles Times, and Movieline.

Be the first to review Fantastic Beasts and Where to Find Them : Niffler Deluxe Book and Model Set. 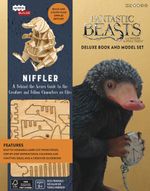 Fantastic Beasts and Where to Find Them : Niffler Deluxe Book and Model Set

Films Harry Potter For Under 9s Gift Guide
Hold on while we process your request.