by Jonathan Hickman and Ron Garney

Jonathan Hickman's groundbreaking run comes to an explosive end! First, explore the future and the past: Witness the Fantastic Four of the year 3030, and learn the secret history of Marvel's first family! Then, follow the team on a journey through an alien landscape as a life hangs in the balance! And when the fallout from the Kree-Inhuman war threatens galactic peace, how will it affect the stranded Ronan and Crystal Meanwhile, back on Earth, the Panther God chooses the fate of T'Challa. Who will be the Black Panther And when the Wizard returns to claim his "son," Bentley 23, the Fantastic Four and the Future Foundation must join forces to save him! COLLECTING: Fantastic Four 605.1, 605-611

He is known for creating the Image Comics series The Nightly News, The Manhattan Projects and East of West, as well as working on Marvel Comics' Fantastic Four, FF and S.H.I.E.L.D. titles.

In 2012, Hickman ended his run on the Fantastic Four titles to write Avengers and New Avengers, as part the "Marvel NOW!" relaunch.

In 2013, Hickman wrote a six-part miniseries, Infinity, plus Avengers tie-ins for Marvel Comics. As of 2015, he is writing the crossover event Secret Wars.

Be the first to review Fantastic Four By Jonathan Hickman - Volume 6. 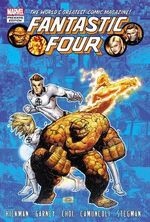 by Jonathan Hickman and Ron Garney