Recipes and Stories from the Land

Farmer Cookbook is a collection of recipes and stories from the heart of rural Australia, created with love by some of Australia's best loved chefs, and by farmers, families and friends in the industries that understand the importance of the food we eat and where it comes from

Farmer Cookbook is a gift of gratitude and support with all sales going towards CWA at a time of great need for rural Australians.

We've interviewed farmers and their working dogs (well, sort of) to tell stories of joy, heartache, resilience, community and innovation in a series of interviews and articles that share with honesty the realities of working the land and the challenges in these prolonged times of drought.

Along with our farmer stories, we offer 80 home-kitchen recipes by a range of chefs including Maggie Beer, Stephanie Alexander, and Jamie Oliver. These simple, indulgent, healthy, comforting and inspiring recipes come together in stunning photographs that will you keep coming back for years to come both in the kitchen and on the coffee table.

Farmer Cookbook is a book of hope and optimism, and a celebration of the resilience, courage and grit of our Australian farmers.

Thank you for sharing meal time and story time for an essential cause.

Jody's strong interest in nutrition and health became a trademark of her work. In 2001 she was approached by the National Heart Foundation of Australia to develop recipes for their new look Deliciously Healthy Cookbook. This book sold twenty five thousand copies within the first six months of its release.

From 1996 -2003 Jody worked as a food consultant to the New South Wales Institute of Sport. Her primary role was to teach elite athletes to cook healthy nutritious meals and provide simple food solutions for their specific dietary requirements. In 2000-2002 Jody worked as Food Editor for the Australian Institute of Sport cookbooks Survival of the Fittest and Survival from the Fittest.

Realising that the market for health-based cookbooks was severely lacking Jody started her own publishing company in 2002. Fortiori Publishing was born and the Health for Life series developed. In 2003 Fortiori won the Gourmand World Food Media Awards Best Nutrition Series. Jody has written and styled 18 books for Fortiori.

The titles include, Low Fat, Diabetes 1 & 2, Allergies, Pregnancy, Baby and Toddler, Wheat and Gluten Free, Christmas Food, Detox, Vegetarian, Fitness Food, Omega 3 and Low Fat for Kids. Jody has managed all aspects of budgets, scheduling, design, sub contracting and production for each of the books. Jody has created 4 cooking DVDs for the Health for Life series. These were released in October 2006.

Jody worked as a Food Consultant to Jamie Oliver's Ministry of Food from 2011 to 2013 where she was responsible for training all of the centre and mobile truck staff. Jody currently writes a fortnightly healthy food blog for Jamie Oliver's website and continues to work as a Freelance Food Writer and Food Stylist both in Australia and overseas.

She also runs healthy cooking classes in Bangalow Australia. Jody's passion for health extends beyond her cookbooks. She also teaches regular yoga classes in Bangalow and is constantly researching new ways to help people improve their health, wellbeing and happiness.

Be the first to review Farmer. 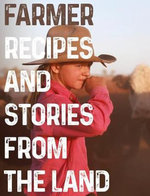