The Stella Prize 2015 Longlisted for the Dobbie Literary Award 2015

'Maxine Beneba Clarke is a powerful and fearless storyteller, and this collection - written with exquisite sensitivity and yet uncompromising - will stay with you with the force of elemental truth. Clarke is the real deal, and will, if we're lucky, be an essential voice in world literature for years to come.' - Dave Eggersbestselling author of A HEARTBREAKING WORK OF STAGGERING GENIUS and many more.

'Foreign Soil is a collection of outstanding literary quality and promise. Clarke is a confident and highly skilled writer.' - Hannah Kent, bestselling author of BURIAL RITES

In Melbourne's western suburbs, in a dilapidated block of flats overhanging the rattling Footscray train lines, a young black mother is working on a collection of stories.

The book is called FOREIGN SOIL. Inside its covers, a desperate asylum seeker is pacing the hallways of Sydney's notorious Villawood detention centre, a seven-year-old Sudanese boy has found solace in a patchwork bike, an enraged black militant is on the warpath through the rebel squats of 1960s Brixton, a Mississippi housewife decides to make the ultimate sacrifice to save her son from small-town ignorance, a young woman leaves rural Jamaica in search of her destiny, and a Sydney schoolgirl loses her way.

Maxine Beneba Clarke is a widely published Australian writer of Afro-Caribbean descent. Maxine's short fiction, non-fiction and poetry have been published in numerous publications including Overland, The Age, Meanjin, The Saturday Paper and The Big Issue.

Her critically acclaimed short fiction collection Foreign Soil won the ABIA for Literary Fiction Book of the Year 2015 and the 2015 Indie Book Award for Debut Fiction, and was shortlisted for the Matt Richell Award for New Writing at the 2015 ABIAs and the 2015 Stella Prize. She was also named as one of the Sydney Morning Herald's Best Young Novelists for 2015.

Be the first to review Foreign Soil. 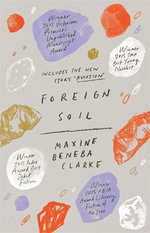 Fiction Contemporary fiction Short stories
Hold on while we process your request.