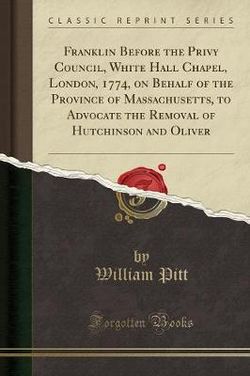 Franklin Before the Privy Council, White Hall Chapel, London, 1774, on Behalf of the Province of Massachusetts, to Advocate the Removal of Hutchinson and Oliver (Classic Reprint)

Excerpt from Franklin Before the Privy Council, White Hall Chapel, London, 1774, on Behalf of the Province of Massachusetts, to Advocate the Removal of Hutchinson and Oliver In 1773, Franklin was residing in London as commissioner for the Colonies of Massachusetts and Pennsylvania, and also of New Jersey and Georgia 5 coming to the knowledge of certain letters written by Governor Hutchinson and Lieutenant Governor Oliver, of the province of Massachusetts, to persons in power and office in England, calling for suppressive measures, and advising action detrimental to the interest of the colonies and subsequently Obtaining possession Of the letters, he transmitted copies of them to the Speaker of the As sembly of Massachusetts; at the same time calling attention to the insidious character of the documents, and the unfaithful character of their public officers. The perusal of these letters excited the greatest indignation. The House of Representatives respectfully petitioned his Majesty for the removal of the Governor and Lieutenant Governor; charging them with betraying their trust, and the people they governed and with giving private, partial, and false information to those in power. They also declared them enemies to the colonies, and prayed for their speedy removal from office.

Be the first to review Franklin Before the Privy Council.

Franklin Before the Privy Council, White Hall Chapel, London, 1774, on Behalf of the Province of Massachusetts, to Advocate the Removal of Hutchinson and Oliver (Classic Reprint)