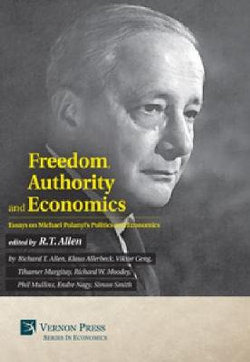 The essays in this volume deal with the economic and political thought of Michael Polanyi.

Requiring little prior knowledge of Polanyi, the essays in this volume further develop a somewhat neglected side of Polanyi's work. In particular it examines the 'tacit integration', of subsidiary details into focal objects or actions as central to all knowing and action. The essays in this volume trace ontological counterparts in the structures of comprehensive entities and complex actions, and a multi-level universe in which lower levels have their boundary conditions, the extents to which they apply, determined by those of the next higher level, whilst each possessing its own laws or operative principles. This schema of 'dual control' preserves the reality and relative autonomy of each level, and its interactions with others, against the various reductions.

The essays in this volume also employ and develop important further concepts and distinctions such as: 'corporate' and 'spontaneous' order; 'public' and 'private' liberties; 'general' and 'specific authority'; and 'moral inversion'; which, as the essays show, are necessary for understanding and maintaining a free society and the freedom of institutions within it. Among the topics treated with them are: more of the prerequisites of freedom in public liberties dedicated to principles and transcendent values; totalitarianism and society as spontaneous order; the balance of general and specific authority in society and particular institutions; reductionism, totalitarianism and consumption in consumer societies, as moral inversions; the mutual interactions of economics and politics as distinct and autonomous but interacting levels; the sociological aspects of economics; and Polanyi's own contributions to sociology.

Although, as indicated, Polanyi has his special terms, the essays in this volume, like his works, give them meaning with concrete examples and so avoid merely shuffling a mass of abstractions. Together the essays show that his work is a rich seam of ideas and inspiration for yet further extension and application.

Be the first to review Freedom.