From Babel to Pentecost

The Poetry of Pierre Emmanuel

The most prolific and versatile French poet of the mid-twentieth century, Pierre Emmanuel's oeuvre spans five decades and an astonishing array of forms, from epics and love sonnets to patriotic works and prayers. The first full-length study of his works in English, From Babel to Pentecost brings Emmanuel's works to a new generation and a new readership. Mary Anne O'Neil's meticulous study of Emmanuel's complete works traces the poet's development as a thinker and artist while surveying both French and English scholarship on Emmanuel from the 1940s to the present. Employing close readings of poems as well as intertextual and psychoanalytic approaches, O'Neil draws connections between Emmanuel's influences, vocabulary, imagery, and meters, while translations allow English-language readers to engage directly with the texts. O'Neil's insightful commentary sheds light on the poet's relationship to movements in European poetry, to poets of Classical Greece, the Latin Middle Ages, and the Renaissance, and to sacred Hebrew, Hindu, and Buddhist verse.
Keenly attuned to the changing world around him, Pierre Emmanuel exemplifies a poet's power to clarify the human condition, to move, and to teach. From Babel to Pentecost enables readers to rediscover the enduring richness and relevance of his work.

Be the first to review From Babel to Pentecost. 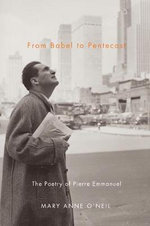 From Babel to Pentecost