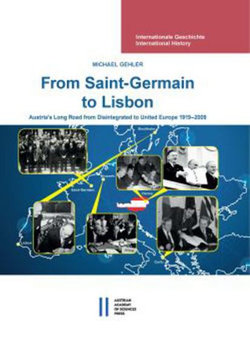 From Saint-Germain to Lisbon

This comprehensive book is mainly based on primary archive sources and eyewitness talks. It focuses on Austria's relations to Europe in general, two significant issues of European integration especially after 1945 as well as on its EU membership. Ten chapters will show the developments over decades in a chronological manner. One concentrates on Austria's small room for political maneuverability between concepts of Middle Europe, Paneurope, the "Anschluss" by Nazi-Germany (1918-1938) and the exile groups (1938-1945). A further chapter deals with Austria's participation in the Marshall-Plan and the Organization for European Economic Cooperation (OEEC, 1947-1953). The next chapter focuses on the intended arrangements with the European Coal and Steel Community (ECSC), which were a tightrope act between Western orientation and neutrality (1954-1956). A further chapter shows the unsatisfactory membership within the European Free Trade Association (EFTA) and the failed attempts of association with the European Economic Community (EEC, 1961-1967). Free trade remained as a substitute solution (1972). One chapter demonstrates Austria's policy of "wait and see" (1972-1986) and a further one examines the attempts of full membership in the European Communities (EC and EU, 1987-1995). Light will be shed on the negotiations and agreements with Brussels (1993-1994) and on the implementation of the EU entry (1994-1995). Austria is also presented as a member of the EU until the Treaty of Lisbon came into force (1995-2009). The reader will get backgrounds of the country's long road to Europe which offers different developments of a story of ambivalence and complexity. The question will also be raised and answered how "Europe" became a controversial issue of domestic policies and national identity. A final assessment will sum up the main aspects. An annex with an edition of 100 documents, many of which new, a bibliography and a chronology provide additional and expanded information.

Be the first to review From Saint-Germain to Lisbon.

From Saint-Germain to Lisbon