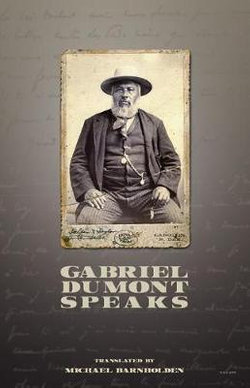 In 1903, eighteen years after leading the Metis Army against the Northwest Expeditionary Force and the Northwest Mounted Police at Fish Creek, Duck Lake and Batoche, Louis Riel's Adjutant General Gabriel Dumont dictated his memoirs to a group of friends, one of whom is thought to have written Dumont's stories out in longhand during that epic meeting. This manuscript languished unseen and unpublished in the Manitoba Provincial Archives as part of L'Union nationale metisse de Saint-Joseph collection until its discovery there by Michael Barnholden in 1971. Now re-translated into English, it preserves the record of an unrepeatable oral recital, offering us a rare opportunity to view one of the central events in the history of the Metis in a new context: as perceived by one of their key heroes.

Like Riel, Dumont put the interest of his people ahead of his own. Although he could neither read nor write, he was an eloquent speaker, sought after to defend Metis rights both in Canada and the United States throughout the 1880s and 1890s. Known to have spoken Blackfoot, Sioux, Crow, Cree, French and English, Dumont dictated his memoir in "incipient Michif," thought to be his first language: using Cree syntax and some verbs, with a vocabulary that was primarily French.

Dumont's first-person account of the details of his early life, leading up to the events variously referred to as the Riel Rebellion, the Northwest Rebellion or the War of 1885, provide a third reading of the "Rebellion" from the point of view of its military leader, as well as many personal, cultural and historical revelations worthy of examination. In addition, Dumont's sheer strength of narrative carries these decisive events with a conviction, drama and suspense that only the tradition of oral history can deliver.

Be the first to review Gabriel Dumont Speaks. 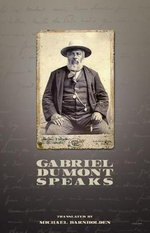