Be the first to write a review
Tweet
RRP  $19.99 $19.35
An Anzac tale of three families whose destinies are entwined by war, tragedy and passion.At 17, Veronica OShay is happier running wild on the family farm than behaving in the ladylike manner her mother requires, and she despairs both of her secret passion for her brothers friend Jack Murphy and what promises to be a future of restraint and compliance.  But this is 1913 and the genteel tranquillity of rural Beecroft is about to change forever as the OShay and Murphy families, along with their friends the Dwyers, are caught up in the theatre of war and their fates become intertwined.From the horrors of Gallipoli to the bloody battles of the Somme, through love lost and found, the Great Depression and the desperate jungle war along the Kokoda Track, this sprawling family drama brings to life a time long past a time of desperate love born in desperate times and acts of friendship against impossible odds.A love letter to Australian landscape and character, Gallipoli Street celebrates both mateship and the enduring quality of real love. But more than that, this book shows us where we have come from as a nation, by revealing the adversity and passions that forged us.A stunning novel that brings to life the love and courage that formed our Anzac tradition. Mary-Anne O'Connor nee Best grew up in Wahroonga in the Bushland Shire of Hornsby-Kuringai, northern Sydney. The youngest of six children, her childhood was spent exploring the local bush and playing music with her siblings and close neighbours. An avid reader, she devoured her mother Dorn's extensive library and was often found trying to finish a chapter by torchlight late at night. She also began to fill every blank piece of paper in the house with stories and drawings of her own and dreamt of becoming a writer one day.

When she was twelve her father Kevin Best left his established career in the stock-market to become one of Australia's best-loved artists. The perseverance and ultimate triumph she witnessed during those years left her inspired to follow in his footsteps and pursue her own creative aspirations. A colourful marketing career followed, along with the completion of education/arts degree with specialities in literature, music and environment. During this time she also co-wrote two books with her father, A Brush with Light and Secrets of the Brush. Work then began on her first major novel, Gallipoli Street. This work gained critical acclaim and finished at #3 for debut novels in Australia in 2015. Her second novel Worth Fighting For was published in October 2016 and her third war story War Flower was released in October 2017.

Mary-Anne has drawn on her love of the Australian bush, her fascination with her own family history and her deep, abiding respect for the men and women who carried our nation through turbulent, formative times to produce these novels. It was written in her office at home, surrounded by her grandfather's war memorabilia and beneath a long window that overlooks her beloved gum trees. Mary-Anne still lives in the Bushland Shire with her husband Anthony, their two sons, Jimmy and Jack and their very spoilt dog, Saxon.

Be the first to review Gallipoli Street. 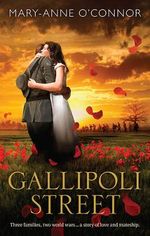