The first collection of essays on Gerhard Richter, who has been called "the greatest modern painter."

The contemporary painter Gerhard Richter (born in 1932) has been heralded both as modernity's last painter and as painting's modern savior, seen to represent both the end of painting and its resurrection. Richter works in a dizzying variety of styles, from abstraction to a German cool pop that combines painterly technique and appropriation; his work includes photo paintings, large abstract canvases, and stained glass windows. This collection features writing by prominent critics, including Hal Foster, Gertrud Koch, and Thomas Crow; an essay by Rachel Haidu on Richter's family pictures that is published here for the first time; and an essay and two interviews with the artist by Benjamin H. D. Buchloh, Richter's "longtime sparring partner" (as the curator Robert Storr has called him). These writings examine Richter's work as a whole, from October 18, 1977, his dreamlike series of paintings depicting the dead Baader-Meinhof gang, to his abstract trio Abstract Paintings; from his unsettling portrait of "Uncle Rudi" in Nazi garb to his late series of portraits of his wife and young child. This addition to the October Files series will be an essential handbook to one of the most enigmatic figures in contemporary artContents Gerhard Richter and Benjamin H. D. Buchloh Interview (1986) Gertrud Koch The Richter-Scale of Blur (1992) Thomas Crow Hand-Made Photographs and Homeless Representation (1992) Birgit Pelzer The Tragic Desire (1993) Benjamin H. D. Buchloh Divided Memory and Post-Traditional Identity: Gerhard Richter's Work of Mourning (1996) Peter Osborne Abstract Images: Sign, Image, and Aesthetic in Gerhard Richter's Painting (1998) Hal Foster Semblance According to Gerhard Richter (2003) Johannes Meinhardt Illusionism in Painting and the Punctum of Photography (2005) Rachel Haidu Arrogant Texts: Gerhard Richter's Family Pictures (2007) Gerhard Richter and Benjamin H. D. Buchloh Interview (2004)

Be the first to review Gerhard Richter: Volume 8. 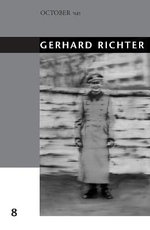 Individual artists Painting & paintings Art & design styles: from c 1960
Hold on while we process your request.