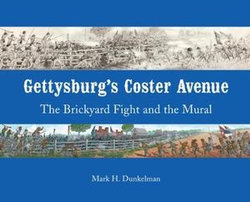 The Brickyard Fight and the Mural

Coster Avenue, the smallest portion of the Gettysburg National Military Park, marks the site of some of the last fighting on July 1, 1863, the First Day of the great battle. There, in what was then a brickyard, Col. Charles Coster's Union brigade made a forlorn and futile stand against the two Confederate brigades of Gen. Harry Hays and Col. Isaac Avery. Outnumbered by more than three to one, Coster's brigade was shattered and sent reeling in a pell-mell retreat through the streets of Gettysburg to the safety of Cemetery Hill. The action resulted in almost 800 casualties, most of them Union soldiers. Among the killed was Sgt. Amos Humiston of the 154th New York, who became celebrated as the father of the "Children of the Battle Field."

In the decades following the Civil War, Coster Avenue - hidden away off a Gettysburg side street - languished as one of the least-visited parts of the Gettysburg National Military Park. In 1970, Mark H. Dunkelman, an artist and historian of the 154th New York, saw the roofing company that owned the property adjacent to Coster Avenue was building an addition to its warehouse. A blank concrete wall was going up about ten feet from the monument to the regiment he studied. Inspiration struck. Dunkelman designed a mural to cover the 80-feet-long wall. He and his artistic partner Johan Bjurman painted and installed the mural in 1988, the 125th anniversary of the battle. In the years since then, as exposure took its toll on the painting, Dunkelman and Bjurman produced two newer versions of the mural, the current one rendered on glass.

In Gettysburg's Coster Avenue: The Brickyard Fight and the Mural, Dunkelman tells the little-known story of the battle that inspired the mural and the saga of how the painting came to be and its several permutations. Published on the mural's thirtieth anniversary, this book includes more than fifty photographs, many in color and previously unpublished, a map, and source notes to the text. Gettysburg's Coster Avenue is the definitive account of this much admired public artwork, told by the mural's creator in his own words.

Be the first to review Gettysburg'S Coster Avenue.