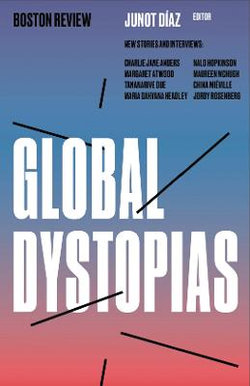 by Maureen McHugh, Nalo Hopkinson,  Charlie Jane Anders and others

Stories, essays, and interviews explore dystopias that may offer lessons for the present.

As the recent success of Margaret Atwood's novel-turned-television hit Handmaid's Tale shows us, dystopia is more than minatory fantasy; it offers a critical lens upon the present. "It is not only a kind of vocabulary and idiom," says bestselling author and volume editor Junot Diaz. "It is a useful arena in which to begin to think about who we are becoming."

Bringing together some of the most prominent writers of science fiction and introducing fresh talent, this collection of stories, essays, and interviews explores global dystopias in apocalyptic landscapes and tech futures, in robot sentience and forever war. Global Dystopias engages the familiar horrors of George Orwell's 1984 alongside new work by China Miéville, Tananarive Due, and Maria Dahvana Headley. In "Don't Press Charges, and I Won't Sue," award-winning writer Charlie Jane Anders uses popularized stigmas toward transgender people to create a not-so-distant future in which conversion therapy is not only normalized, but funded by the government. Henry Farrell surveys the work of dystopian forebear Philip K. Dick and argues that distinctions between the present and the possible future aren't always that clear. Contributors also include Margaret Atwood and award-winning speculative writer, Nalo Hopkinson.

In the era of Trump, resurgent populism, and climate denial, this collection poses vital questions about politics and civic responsibility and subjectivity itself. If we have, as Díaz says, reached peak dystopia, then Global Dystopias might just be the handbook we need to survive it.

Be the first to review Global Dystopias. 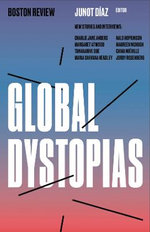 by Maureen McHugh, Nalo Hopkinson,  Charlie Jane Anders and others