Once upon a time that was called 1828, before all fishes in the sea and all living things on the land were destroyed, there was a man named William Buelow Gould, a white convict who fell in love with a black woman and discovered too late that to love is not safe. Silly Billy Gould, invader of Australia, liar, murderer & forger, condemned to the most feared penal colony in the British Empire and there ordered to paint a book of fish. Once upon a time, there were miracles... Richard Flanagan was born in Longford, Tasmania, in 1961. He is descended from Irish convicts transported to Van Diemen’s Land in the 1840s. His father is a survivor of the Burma Death Railway. One of his three brothers is Australian Rules football journalist Martin Flanagan. He grew up in the remote mining town of Rosebery on Tasmania’s western coast.

His novels, Death Of A River Guide, The Sound Of One Hand Clapping, Gould’s Book Of Fish, The Unknown Terrorist, Wanting and The Narrow Road to the Deep North have received numerous honours and are published in twenty-six countries.

He directed a feature film version of The Sound Of One Hand Clapping. A collection of his essays is published as And What Do You Do, Mr Gable?

His latest book The Narrow Road to the Deep North won the 2014 Man Booker Prize for Fiction.

Be the first to review Gould's Book Of Fish. 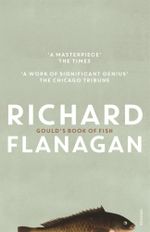